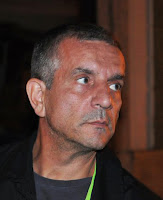 PANAGIOTIS RAPPAS was born in the of , . He studied Painting, Engraving and Animation in .
In 1985 he began working in the animation industry, in and getting experience in all aspects on the production process of an animated feature film.
In 1989 when Steven Spielberg opened AMBLIN-Universal animation studio in , he was one of the first-recruited artists. The same time he continues to work as a freelance animation director in various animated projects and television commercials in 's .
In 1995 he co-founded Stardust Pictures Ltd and acted as Producer and Creative Director of the projects undertaken by the company such as the acclaimed "1001 Nights" for the Los Angeles Philharmonic and the Oscar nominated animation short "The Periwig Maker".
Between 1998 and 2000 he moved to the to provide Storyboard, Layout Supervision and Sequence Direction on various projects for Paramount/Nickelodeon.
His animated children films won international recognition and many awards around the globe.
Next to his animation work he did Stage Design for many Theatre plays and Illustrations for Children Books.
Panagiotis Rappas is a voting member of the and Science.

“THE LITTLE MOUSE WHO WANTED TO TOUCH A STAR”

“THE BOY AND THE TREE”